What are you looking for?

The work of Turley, partner organisations and Warwick District-based charity One World Link in Sierra Leone has been recognised in a major international award for town planning work.

One World Link’s work, which is a partnership between the charity, organisations in the UK, including Turley, and the city of Bo in Sierra Leone, was “Highly Commended” by the Commonwealth Association of Planners (CAP) in its 2019 Awards for Outstanding Planning Achievement in the Commonwealth announced in Ghana on Saturday 9  November. Entries for this award were received from around the world but One World Link was the only UK entry to be even shortlisted.

One World Link and Turley have been working with Bo City Council for several years to develop a plan to guide the growth of the city. We teamed up with town planners from Warwick and Leamington and Prince Charles’ Prince’s Foundation to deliver training and support for colleagues in Sierra Leone, and run several joint training workshops to help develop a plan for the city.

Bob May, Director at Turley, who led the workshops, said:

‘It’s great to have the commitment of all parties recognised. Our hope is that the lessons learned in this planning for Rapid Urbanisation can enhance the sustainable development of towns and cities in many parts of the Commonwealth”. 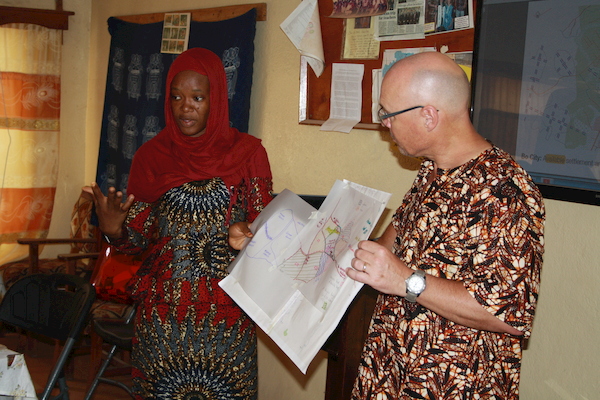 “It is a great honour for our work to be recognised in this way.  Bo is currently a city of 175,000 people but, like many middle-sized African cities, is likely to grow massively in the next few years to three times this size by 2045.  Sierra Leone does not have an effective planning system, so developing any type of meaningful plan for the city is challenging to say the least.  We were, however, hugely encouraged by the way that local people in Bo, with no planning training, embraced the ideas behind developing their own plan.  It was really important that the ideas for how Bo should grow should come from them.  Hopefully the recognition from this award will give them further encouragement to take this important work forward.”

One World Link will be travelling to Sierra Leone in January to undertake further training and continue to support this work.

Clive Harridge, Secretary-General of the Commonwealth Association of Planners and a Warwickshire resident, presented the Award to Philip Clarke and John Archer at the Town Hall, Leamington Spa and said:

“The Commonwealth Association of Planners Awards champion the very best of planning from across the Commonwealth. The Award winners were selected by an eminent independent panel of judges and I am hugely delighted that the work One World Link and its partners have been undertaking in Bo has been Highly Commended.  It was a real privilege for me to present the Award in person to Philip Clarke and John Archer.  The planning work in Bo which is ongoing is of the highest standard and is being used as a model for others to follow across the Commonwealth.”