What are you looking for?

Madness in the method: 2016-based household projections

Having run today’s 2016-based household projections for England through the Government’s standard method for assessing housing needs it is obvious why the Government is keen to review the latter.

Our initial analysis highlights some nonsensical outcomes for growth areas and entire regions of the country. We conclude that in revising its standard method, the Government must be clear on achieving its target of 300,000 homes a year. But it’s not all about the number. The revised approach must also address the serious spatial implications of a flawed approach that has already led many authorities to adopt what is intended as a starting point as their “last word” on housing requirements.

The new projections dramatically lower the demographic baseline for the standard method. They project the formation of only 165,000 households per annum across England over the next decade, almost 25% below the 218,000 households annually projected by the 2014-based projections. Statisticians have attributed this reduction to lower population projections and revised assumptions on peoples’ living arrangements.

Applying the uplifts and caps subsequently required by the method now implies a national need for around 210,000 homes per annum. This is over 20% lower than the annual need for 266,000 homes suggested when the method was first proposed last September and around 30% below the Government’s target of delivering 300,000 homes each year by the mid-2020s.

Of even greater concern is that the method now suggests a need for fewer homes than the 217,000 a year delivered in 2016/17. This defies logic and is entirely inconsistent with the Government’s repeated pronouncements of the need to significantly boost delivery from current levels.

Last week’s publication of new guidance1 requires authorities to consider and justify the output of the standard method in the context of previous delivery levels and earlier assessments of housing need. This is a welcome and necessary step in the right direction. However, the door remains open for authorities to simply try and plan on the basis of the minimum figure calculated through the standard method.

If applied using the current standard approach to housing needs, the projections would produce some nonsensical outcomes:

The plan below starkly illustrates these consequences. 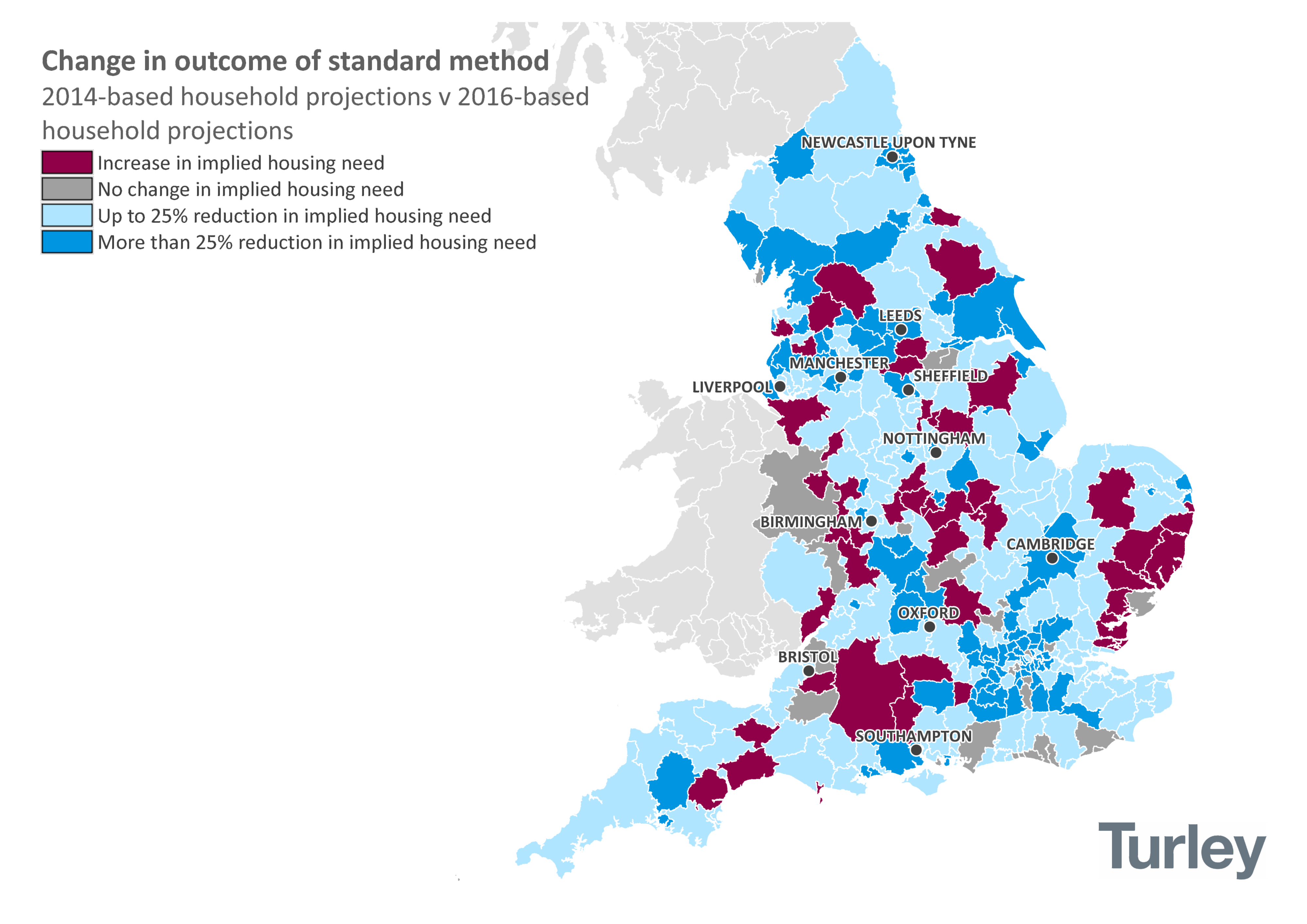 What would this mean in practice?

If adopted for five year land supply2 purposes  the effect of the projections would cause havoc in live and upcoming appeals on housing land supply.  While the effect on plan-making will be less immediate3, many authorities have already cited the standard method in a lowering of growth ambitions.  Still lower figures will no doubt be politically appealing where difficult decisions would otherwise need to be made.

The method has to change

There can be no justification for lowering planned housing growth at a time when there is a national housing crisis. The Government appears to have recognised that the new household projections do just this. This explains the advance notice of a review of the standard method for assessing housing needs.  It is also interesting to note that the ONS has itself reiterated the uncertainty of projections, and refers to the future release of new scenarios in the “small print” of the household projections.

In revising its approach it is imperative that the Government is not just clear on the need to deliver 300,000 new homes a year but also takes care to consider the spatial implications of its method for different areas of the country. It is not plausible that growth areas require no new homes, or that the entire north of England only requires half the number of homes that have previously been delivered in the area.

Without immediate and robust action, there is a risk that the door will remain open for authorities to simply plan for minimum figures derived from the standard method and in doing so prolong and exacerbate the housing crisis that is already having severe economic and social consequences.

We await the promised consultation on a revised approach which is expected to be subject to consultation imminently.

To discuss the current or potential future implications of the new household projections and the standard method, please contact Antony Pollard or Andrew Lowe.

2 In accordance with para 73 of the Framework where strategic policies are more than five years old.